We have built a simple showcase based on Unity and Mirror Networking where players run around a simple foggy neighborhood and can experience 3D voice based on their position in 3D space and position independent walkie-talkie with multiple channels.

In addition to voice, this demo leverages UserData to sync the location within the map with ODIN servers. A simple web app is built to show player positions, if they are talking and which direction they are running. You can also talk to other players directly within the Commander App.

These shots give you an impression of the demo. Try to find your friends and colleagues in this foggy world. 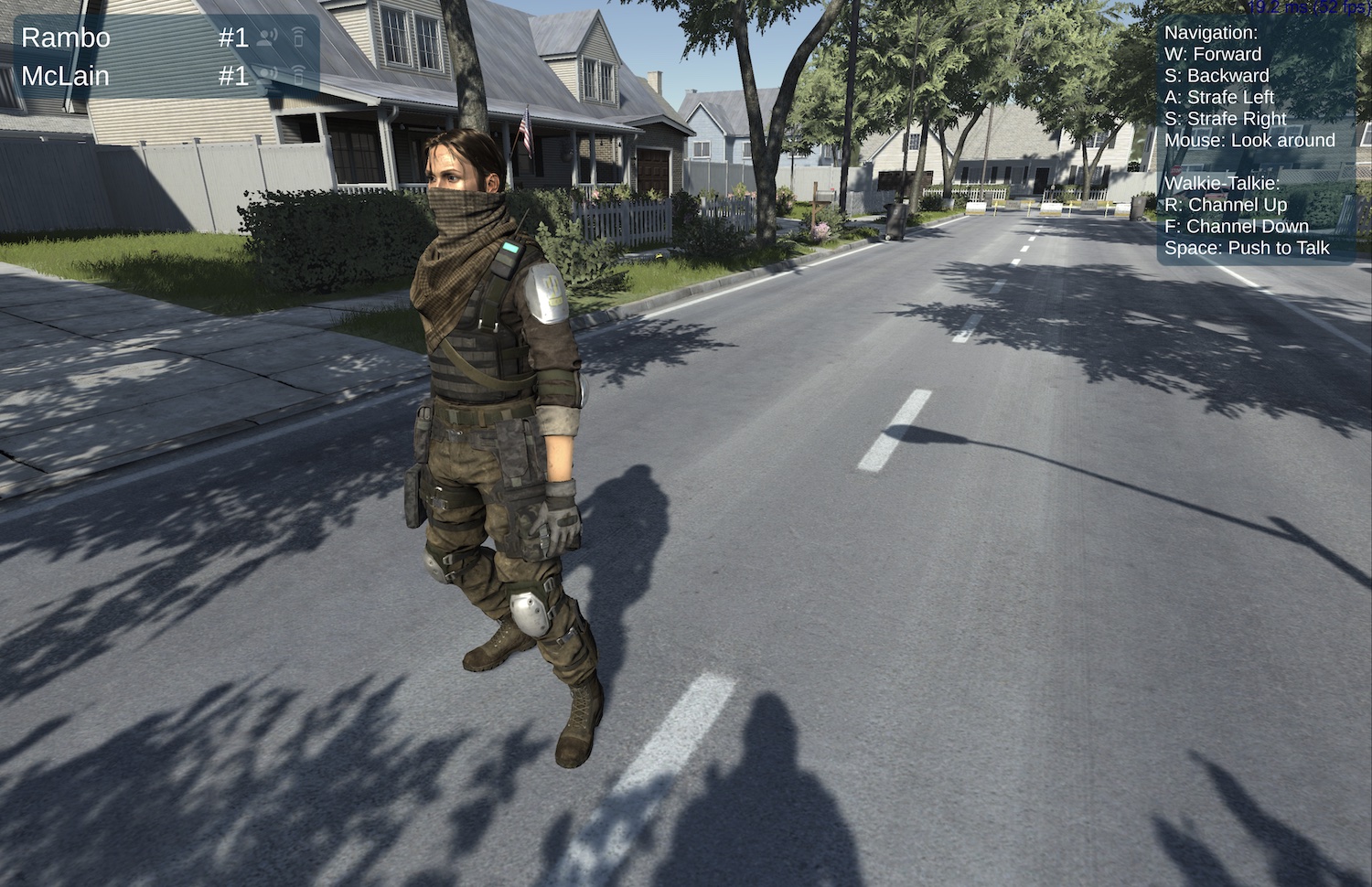 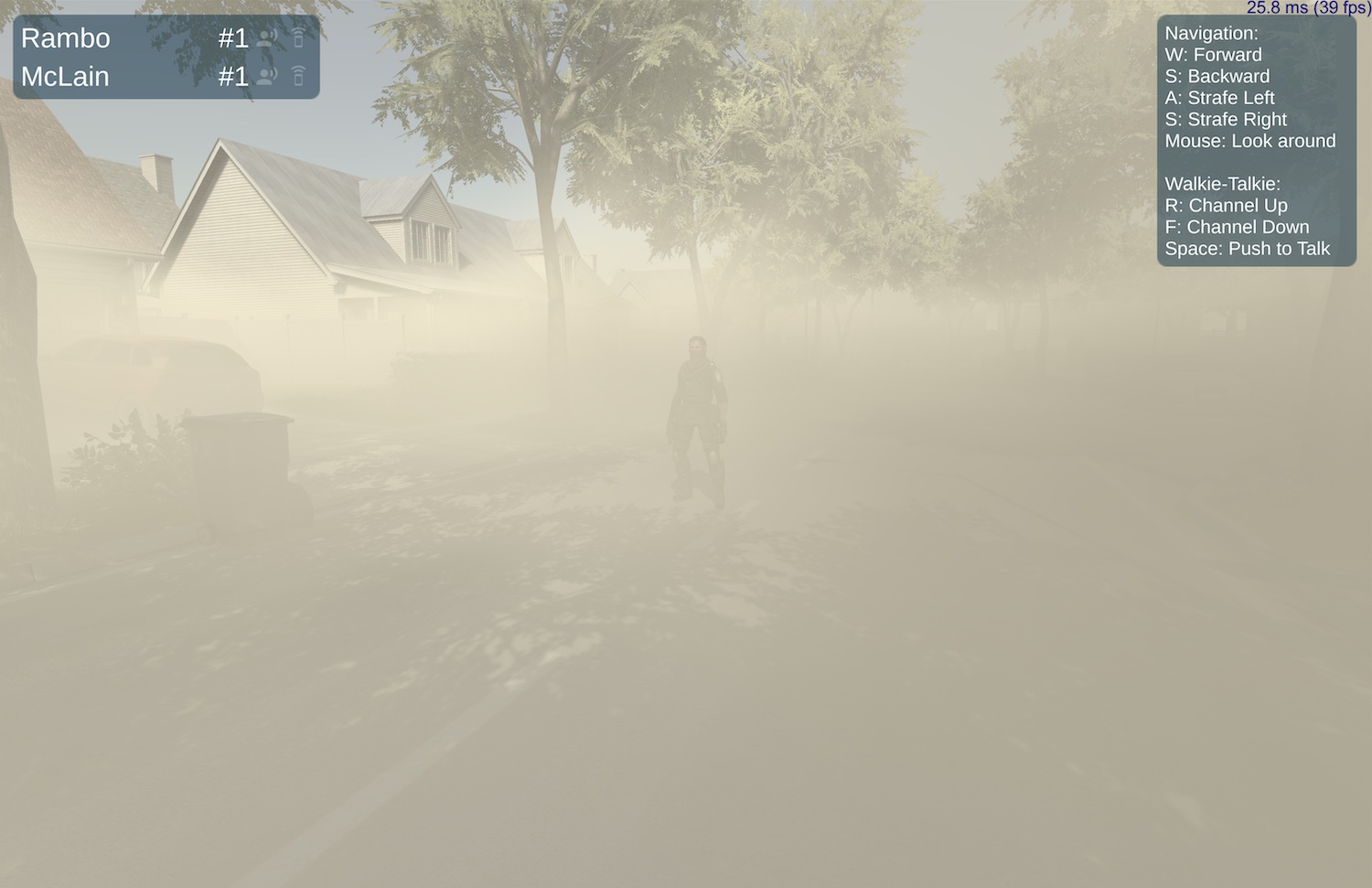 You can download the showcase demo with the URLs below. Try it with your friends and have fun :-).

In this web app, you can see all players that are active within the demo showcase. Download the demo, run it and you’ll see yourself running around in the app below. This app is built with the Web SDK.

You can run the demo standalone on your mobile device using this link:

This is the web app built as a Web Component which can be added to any website with these few lines:

As you can see, ODIN can be integrated with ease everywhere. Check out this live demo directly embedded into our developer documentation.

Some technical details about how everything works.

This demo is built with Unity and Mirror Networking. A dedicated server is running in our 4Netplayers Server Hosting Service. The default IP address in the lobby is pointing to this server. But you can also host your own server-client combo by clicking on the Host button in the Lobby.

While building this app, we just followed our own guide on how to integrate ODIN into Unity and Mirror Networking. So, just follow that guide to learn how the basic network topology is designed and how 3D positional audio is integrated in the game. Don’t worry, it’s a short read, as the whole process is pretty simple and straightforward.

The demo features two ways to talk to each other: 3D positional audio, where volume and direction is adjusted (automatically) based on the position of the other players in the scene, and a walkie-talkie communication with audio effects and multiple channels. Our Event handling guides describes how to handle multiple voice rooms simultaneously.

The commander app is a very basic web application built with Angular 13, integrating our ODIN Web SDK. It’s based on our Angular Demo that is available in our Github repository.

To integrate ODIN into Mirror Networking we already leverage User Data to map Mirror Networking IDs to ODIN Peer IDs (so the voice of Player A is attached to the corresponding player game object in the scene).

For the Commander App, we extended the PlayerUserDataJsonFormat class with a few additional properties:

Then, 10 times a second, we call a UpdatePlayerPosition function in our GameManager singleton which creates a JSON representation of the PlayerUserDataJsonFormat and sends it to the ODIN server, which makes sure, that these user data are in sync with each client:

User Data is a very powerful feature. You just define a data structure that you want to attach to each peer in the ODIN room and ODIN makes sure, that this data is shared with each client connected. User Data can be anything, as internally this is just a byte array. JSON is a good format as its available cross-platform, can be easily processed and it’s also human-readable so you can easily check out via console logs if everything works as expected.

Using that data, we map the position in Unity units to the 2D-position on our top-down map shown in the commander. Then we just use the CSS properties left and top to position our location pin and use transform: rotate(..deg) to rotate the direction indicator.

A simple icon within the direction pin reflects if the user is talking right now.

We also wanted to allow the commander to talk to players, to showcase the multiplatform support ODIN provides. Everyone can talk with everyone independantly of OS, framework or eco-system within the same ODIN room (and if you need to with permissions handled by our token system).

We did disable audio out in this demo, so the commander can say something to players in the game, but can not hear them. As players within the game might not be aware of the commander app we did not want to expose their voice to everyone with an internet connection. Our token system allows detailed permission handling to make sure only those people with permission can hear others, but that’s a simple tech demo so we kept it simple.

Keep the lower button pressed and start talking. All players in the game will hear your voice with a nice audio effect.

This is as simple as it gets. When connecting a room, we create an OdinMedia object but don’t start it yet, i.e. everything is prepared, but no data is sent to ODIN servers:

When the commander app is started, the user is joining the ODIN room as a “spectator”. We need to handle that within the game differently as if a “real” user is joining the room with a player objct in the scene. This is very easy and I’ll show you how we handled that. Whenever a peer joins a room, all clients receive a PeerJoined event.

While this might look a bit confusing it’s very simple: