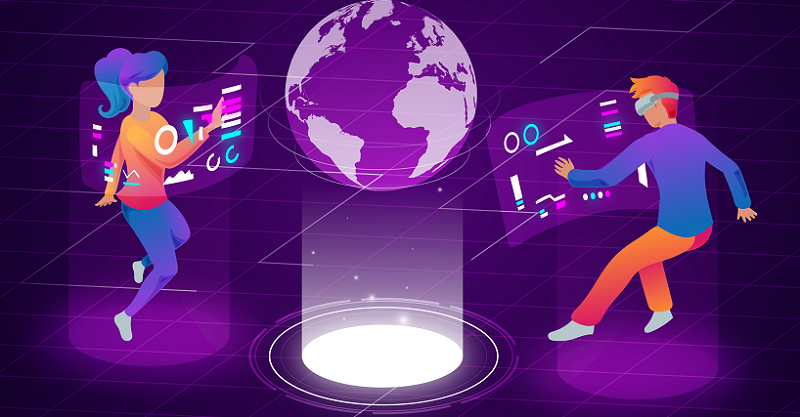 The concept of a “metaverse” can be traced back to the science-fiction literature and futurism of the 20th century. The idea of a virtual world that is fully immersive, seamlessly interconnected, and accessible to anyone with a computer has been a recurring theme in science fiction for decades.

The first use of the term “metaverse” was by Neal Stephenson in his 1992 science fiction novel Snow Crash. The metaverse in the novel was a virtual reality-based successor of the internet. It was described as a fully immersive 3D virtual world where users could interact with each other and computer-generated objects in real-time. Similar concepts of ‘interactive internet’ have been portrayed several times, including on The Simpsons.

In the early days of the internet, virtual worlds like Habitat, Club Caribe, and The Palace emerged as some of the first online communities where people could interact with each other in a simulated environment. These early virtual worlds were primarily text-based and users interacted with each other using simple 2D avatars.

As technology progressed, so did the sophistication of virtual worlds. With the advent of faster internet speeds and more powerful computers, virtual worlds became more immersive and began to incorporate 3D graphics. In the late 1990s and early 2000s, massively multiplayer online games like Ultima Online, Everquest, and World of Warcraft were released, which were some of the first virtual worlds to achieve mainstream success. Online spaces like Habbo started populating the metaverse even before the term was fully used.

The development of virtual reality (VR) and augmented reality (AR) technology in the 21st century has been a significant step towards the metaverse as a reality. VR and AR technology allow for even more immersive and realistic virtual experiences. Companies such as Facebook (now Meta), Google, and Microsoft have invested heavily in the development of VR and AR technology, and they see the metaverse as the next big advancement in the field of computing.

We wouldn’t be able to talk about the metaverse without going further into the science fiction hole. We have all, at some point in life, dreamt about having a Holodeck. A Holodeck is a fictional device that is used for entertainment and training aboard the USS Enterprise in the Star Trek franchise. It is a holographic environment that allows users to interact with a simulated world, including other characters and objects. The Holodeck can recreate any environment or scenario, and it can be used for a variety of purposes, including recreation, training, and problem-solving.

Where are we now?

As of now, the metaverse concept is still in development, with a lot of experimentation and research going on, with no specific agreed upon definition or prototype. The concept is evolving with time. The main drivers are currently gaming and socializing, but also education, healthcare, and enterprise. Many platforms are experimenting with different technical approaches, from cloud-based simulations to local networks of edge devices, and various blockchain projects are also experimenting how to provide a decentralized governance of the metaverse.

The metaverse is also seen as the natural progression of the internet, as it builds on the connectivity and interactivity that the world wide web has enabled. The internet has allowed people to communicate and share information with each other from anywhere in the world, and the metaverse will take this one step further by providing a shared, digital space where people can interact with each other in real-time.

Looking into the future

Many believe that the metaverse has the potential to revolutionize the way we interact with each other and with technology. It could provide a new dimension of human interaction, blurring the lines between the physical and digital worlds, and creating a new space for innovation and creativity.

Several commercial brands already started using the metaverse as a new approach to showcase and interact with their audience. The previous internet usage, which was characterised as passive and informational in a 2D interaction, is now advancing to a more hands-on, active approach. In other words, the community experiences everything at once with several senses involved. Commercial brands can take advantage of the metaverse by creating virtual versions of their products and services, and offering them to consumers in the virtual world. This can include virtual stores where customers can browse and purchase items, virtual experiences that allow customers to interact with products in a more engaging way, and virtual events that can be attended by customers from all over the world.

Additionally, brands can use the metaverse to build and strengthen relationships with customers by providing exclusive content, discounts, and other incentives to customers who engage with their virtual offerings. As the metaverse continues to grow, commercial brands that are able to effectively leverage this new medium will have a significant competitive advantage. And this interactivity will grow with time and the advance of technology, such as haptics.

In summary, the metaverse is the next step in the evolution of the internet, providing a fully immersive, seamlessly interconnected virtual world where people can interact with each other and computer-generated objects in real-time. It is driven by the growth of VR and AR technology and the desire for more autonomy and decentralization. Whilst it is still in its early stages of development, the metaverse holds the potential to revolutionize the way we interact with each other and with technology in the future.

As a technology company, with a deep focus on supporting developers and players in creating fully immersive experiences, it is no surprise that 4Players is keen on being at the forefront of the metaverse. Not only for entertainment and social purposes, but we truly see it as the future of education, health, commercialization and much more. If you are building a metaverse, an MMORPG or any kind of multi-user, immersive experience, come talk to us. We are definitely interested in propelling your project further forward!